the internet is now closed....

link
this is it, the internet is now officially complete, and will be shut down to preserve it in it's pristine condition
tags:

link
shamelessly stolen from bruck's profile: tennessee has a "crack tax" under which drug dealers must pay taxes on their illegal drug sales. for paying their taxes they get stamp, and if they're arrested for selling drugs and don't have the stamp they get charged with dealing and with tax evasion. as far as i'm concerned this is great, and as long as all that money goes to treatment and enforcement i see nothing wrong with it. oh and btw, they took in $2 million last year.
tags: 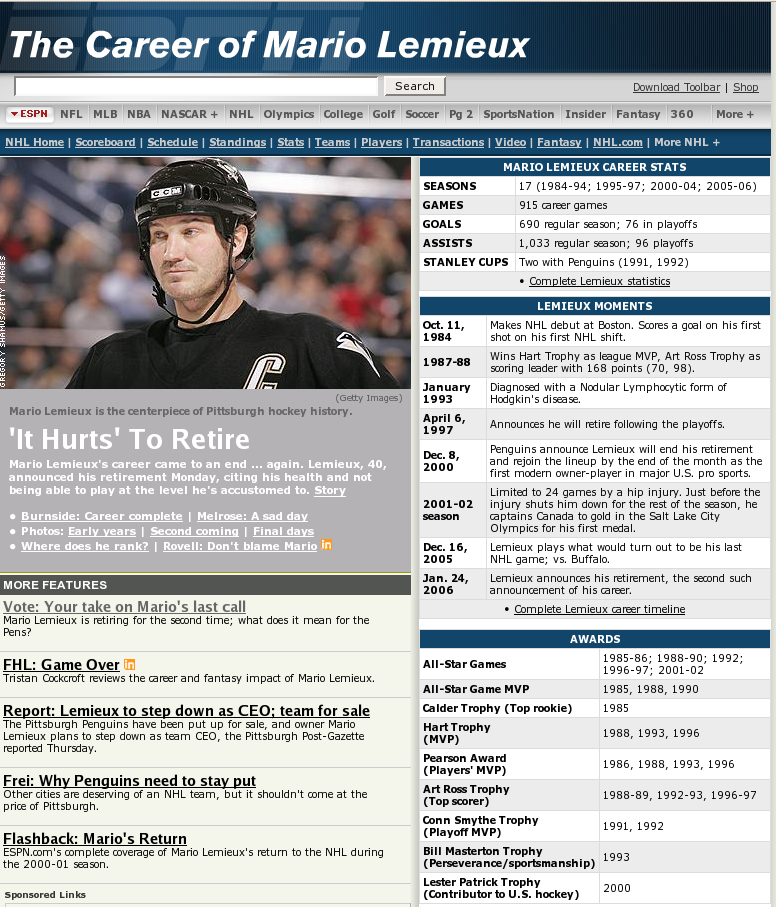 link
who knew that al gore was good for something other than his consumption of o2 and exhalation of co2, oh irony how i love thee. in gore's mlk speech he drew parallels between the fbi's surveillance of mlk during the civil rights movement and bush's no warrant wiretaps against us citizens. now lets see how quickly the democrats run and hide from this potentially worthwhile critique of bush's policies.
tags:

link
i know that hockey refs have been incredibly inconsistent when it's come to the tightening of the interference rules. but from all the hockey i've watched, and if you know me you know i watch a lot, there's been a uncountable number of calls that have gone against the penguins when they're leading or trailing by 1 or tied in the last 5 minutes of games that have cost them the game. now this isn't just hooking, interference etc. take tonights game, crosby and two of the canucks are pushing, shoving, slashing each other while armstrong gets a stick to the face for his troubles and who gets penalties? crosby and one of the canucks, not the other guy crosby was battling with and not the guy who high sticked armstrong. there's also been an incredible number of quick whistles during which the penguins would have scored had the ref not forgotten the rule for blowing a puck dead, and at least one occasion where not only did a late whistle cause a goal against the pens, but there was also goalie interference on fluery on the same play which went uncalled.

if i was one for conspiracy theories i would just say that the league is trying to make it easier to move the team by keeping them from being as competitive as they could be. maybe the nhl should issue statements like the nfl did, of course they only commented that one of their two horribly blown calls against the steelers was wrong.(btw joey porter's comment after the game: "I know they wanted Indy to win this game; the whole world loves Peyton Manning. But come on, man, don't take the game away from us like that.", its great that someone said it, i hope they fine him, i'd chip in) so why would the nhl not condemn the poor calls against the pens? hidden motives perhaps?

now the one thing i can't understand is how many of these calls go against crosby, who the league has to realize is the best thing that has happened to them since gretzky if not since some crazy canadian guy took a bent tree branch and ran out onto a frozen pond. unless the league is upset that he went to the pens who they were trying to drain the life out of so they could relocate them. sure crosby has a temper and some of the calls against him are justified, but 90% of the penalties he takes he takes are plays where an opposition player doesn't get called on a blatant penalty and crosby retaliates. say what you will about not retaliating, if the refs did there jobs there would be no retaliation needed.

just for the record i don't really believe most of the conspiracy stuff that i am saying, but it's hard to explain a lot of this away.

oh and btw, the family guy where optimus prime is jewish, freaking awesome.

demotivation needs to take it to the next level... 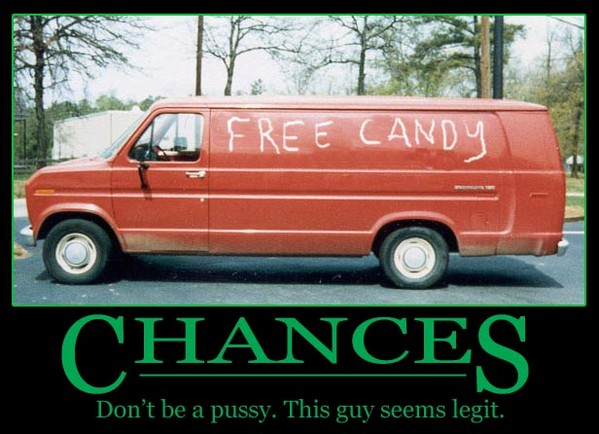 this is as awesome as it is politically incorrect.
tags:

it's really too bad their os is so damn user friendly...

link
cause apple comes out with some seriously cool toys...

magnetic power plug connection, two fingers on the touchpad scrolls, backlit keyboards, linux on one of these bad boys would really fly.
tags:

i don't know what cnn was watching... 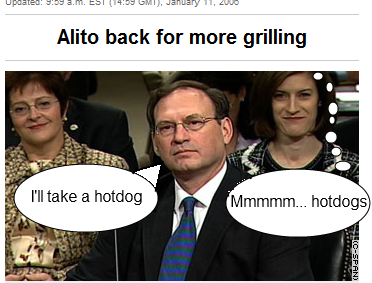 i've seen more grilling in the michael strahan interview by kenny mayne's kids. seriously folks, can we have a hearing in congress where they don't all sit around and blow smoke up eachother's asses?
tags:

they say i have too much free time...

link
but i've got nothing on these guys. mario, luigi, and the princess rock out at what i can only assume is some sort of talent show. if they didn't win i hope all the judges were shot. this just goes to show you i actually have a healthy amount of free time in the grand scheme of things.
tags: