i may just retire now

link
here's the plan, i'm going to hire unemployed retirees to sit in parking lots all throughout maryland and sell these:

first off there's an infinite demand for these bumper stickers in maryland, second no one will think the retiree put it there, so they won't get beat up like i would if i sold it myself. give them a cut and just sit back and watch the funds role in.

follow up idea: also sell these to the people who's car has the other sticker on it and need to cover it up with something:

once again, key aspect, most people won't punch an old lady in the face.. old men... maybe, that's why we bulk them up with wii first.
tags:

move over bingo, it's time to wii 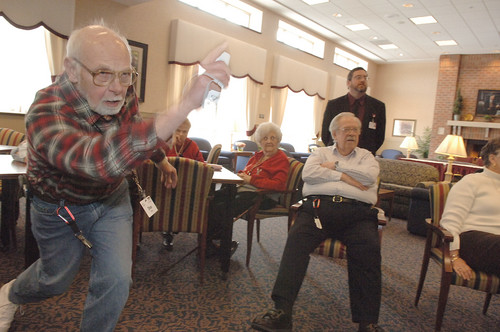 no not that kind of wee. no longer relegated to slow, non-contact nursing home sports, grandpa has a whole new way to hustle pudding from other residents. considering how much pain i'm in after playing wii, i can't imagine this is easy on the fake hip.
tags:

all the news that's fit to print, and all the whiny crackhead bullshit that isn't

link
joe pointed out that the ny times is running a hard hitting and in-depth positively cracked out article about this year's crop of super bowl ads. the article, entitled, "Pardon me sir could you watch my child while I go score some more crack?" "Super Bowl Ads of Cartoonish Violence, Perhaps Reflecting Toll of War" pulls out all the stops when explaining how obvious it was that all the commericals were thinly veiled commentaries about bush's playing cowboys and indians in the sandbox the war in iraq.
there are some really choice quotes in this article:
oh the horrible violence:

In another Bud Light spot, face-slapping replaced fist-bumping as the cool way for people to show affection for one another.

The same gag, turned inside out, accounted for one of the funniest spots, a Nationwide Financial commercial by TM Advertising, also owned by Interpublic. The spot began with the singer Kevin Federline...

about a commercial in which a robot gets fired and commits suicide, only to wake up from a dream as it sinks into the water:

The best of the batch was a commercial for General Motors by Deutsch, part of the Interpublic Group of Companies, in which a factory robot “obsessed about quality” imagined the dire outcome of making a mistake.

yeah too bad all those damn war commercials couldn't have been as happy and upbeat as the robot killing itself.

The problem with the spot, created internally at Prudential, was that whenever the announcer said, “a rock” — invoking the Prudential logo, the rock of Gibraltar — it sounded as if he were saying, yes, “Iraq.”

actually i kept hearing "a rock," maybe it's because i don't have that constant din of the 20 other crazy person voices talking in my head.

oh, and since when has the times been l33t enough to have a digg this story button?

if there are toilets in heaven they look like this

link
roto-rooter's pimped out john contest all i can say is freaking sweet, the only way this could be better is if it was built into a recliner like homer's was.
tags:

link
so by now most everyone has heard about the whole, aqua teen hunger force bomb scare in boston. but what's really funny about this, aside from the fact that no one in the national media, nor apparently the boston police department has ever heard of, or seen a commercial for the show, is two things:
1. the interview about hair styles from the 70s that the two "suspects" gave upon being released from jail in boston "that's not a hair question, i'm sorry....that's also not a hair question." one of the reporters finally resorts to "if you go to jail are you afraid you're going to get your hair cut?"
2. the fact that the bastion of reporting integrity the long island newsday, took the opportunity to kick boston while she was down, reporting less on the story, and more on how boston sucks compared to new york.
make that 3 things: in a comment responding to the newsday story "how does the editor allow this kind of crap journalism in?" obviously this person was a victim of a common typo spelling "nytimes.com" as "newsday.com"
tags: